World Brush is an AR experience where users can paint with brushes on the world around them. Every painting is saved at the approximate GPS location where it was created, and will be recommended to the user around. 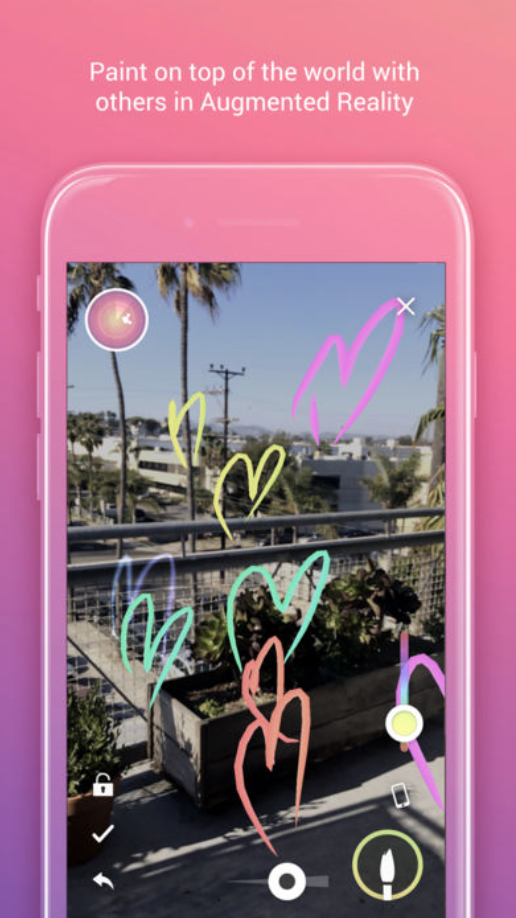 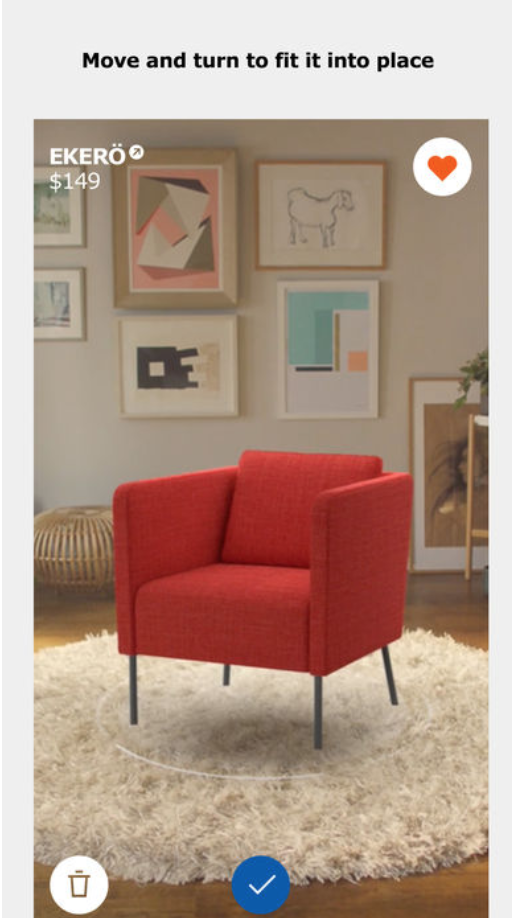 AR MeasureKit makes it really easy to measure different things in the world using your iPhone’s or iPad’s camera. 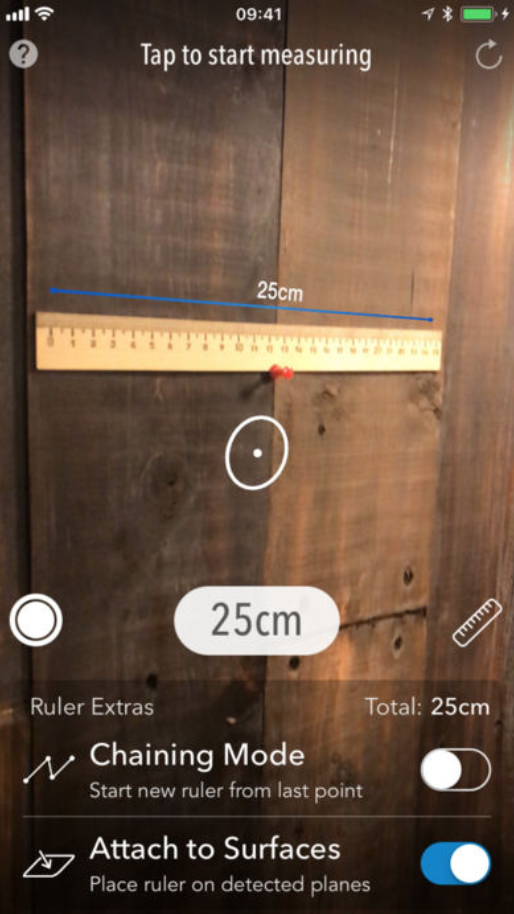 To make your app available only on devices supporting ARKit, use the arkit key in the UIRequiredDeviceCapabilities section of your app’s Info.plist. If augmented reality is a secondary feature of your app, use the ARWorldTrackingSessionConfiguration.isSupported property to determine whether the current device supports the session configuration you want to use. 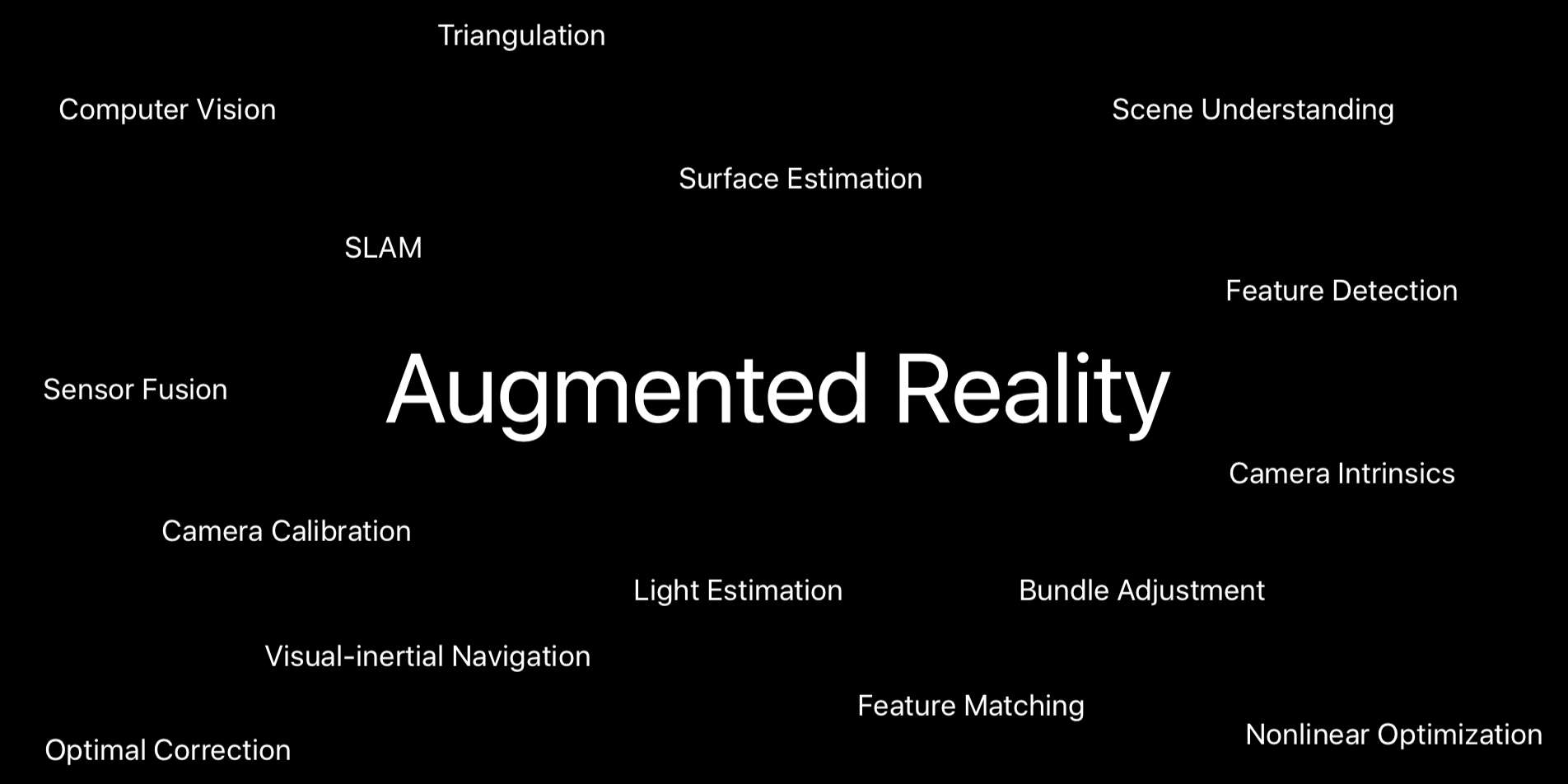 An ARSession object coordinates the major processes that ARKit performs on your behalf to create an augmented reality experience. These processes include reading data from the device’s motion sensing hardware, controlling the device’s built-in camera, and performing image analysis on captured camera images. The session synthesizes all of these results to establish a correspondence between the real-world space the device inhabits and a virtual space where you model AR content.

Every AR experience built with ARKit requires a single ARSessionobject. If you use an ARSCNView or ARSKView object to easily build the visual part of your AR experience, the view object includes an ARSession instance. If you build your own renderer for AR content, you’ll need to instantiate and maintain an ARSession object yourself.

Running a session requires a session configuration: an instance of the ARConfiguration class, or its subclass ARWorldTrackingConfiguration. These classes determine how ARKit tracks a device’s position and motion relative to the real world, and thus affect the kinds of AR experiences you can create.

ARConfiguration is an abstract class; you do not create or work with instances of this class.

To run an AR session, create an instance of the concrete ARConfiguration subclass that provides the kind of augmented reality experience you want to use in your app or game. Then, set up the configuration object’s properties and pass the configuration to your session’s run(_:options:) method. ARKit includes the following concrete configuration classes:

Face tracking is available only on iOS devices with a front-facing TrueDepth camera.

An official example Creating Face-Based AR Experiences demonstrates that you can place and animate 3D content that follows the user’s face and matches facial expressions, using the TrueDepth camera on iPhone X.

Refer to About Augmented Reality and ARKit for an official explanation of the world tracking things.

World tracking process can be illustrated as:

One question here: How does ARKit know how long is 1 meter in the real world? How can Apple’s ARKit (Augmented Reality) do precise measurement with just one camera? is trying to figure this out:

“When an iPhone camera is turned on, it doesn’t have two different images with which to calculate distances. However, a moment after the first image is taken it does have a second image. Thanks to data from the iPhone accelerometer sensors, it can also estimate the difference - from the first image to the second - of the iPhone camera’s 3D position and aim. Now we go back to those “known features” being tracked. For each image the iPhone doesn’t just do this for a single feature, it maps as many features as it can. Aside from doing the triangulation on each of the features in the images, it also does a comparison between the differences in each feature’s relationship to other features in the image. So now, like your brain, the iPhone has two different views of something, knows the approximate angles of focus, knows the distance between the lens position, is tracking known features and their relationship to each other. From this, the iPhone can get a very good approximation of how each feature is positioned in space with relation to the other features, essentially producing a 3D mapping of the space.”

To get better tracking quality:

If tracking quality changes, the tracking state will also change:

And the tracking state changes will be notified by:

After world tracking, we can get the 6 DOF of the camera, used for the upcoming rendering. These infos are stored in each ARFrame.

ARFrame owns video image and position tracking information captured as part of an AR session. There are two ways to access ARFrame objects produced by an AR session, depending on whether your app favors a pull or a push design pattern.

By calling the following method on ARSCNView,

Return the result type from intersecting with an existing plane anchor.

Return the result type from intersecting with an existing plane anchor, taking into account the plane’s extent.

Return the result type from intersecting a horizontal plane estimate, determined for the current frame.

Return the result type from intersecting the nearest feature point.

To display your AR experience in a custom view, you’ll need to:

Refer to Displaying an AR Experience with Metal.

World tracking is an inexact science. This process can often produce impressive accuracy, leading to realistic AR experiences. However, it relies on details of the device’s physical environment that are not always consistent or are difficult to measure in real time without some degree of error. To build high-quality AR experiences, be aware of these caveats and tips.

Refer to About Augmented Reality and ARKit.

World tracking involves image analysis, which requires a clear image. Tracking quality is reduced when the camera can’t see details, such as when the camera is pointed at a blank wall or the scene is too dark.

World tracking correlates image analysis with device motion. ARKit develops a better understanding of the scene if the device is moving, even if the device moves only subtly. Excessive motion—too far, too fast, or shaking too vigorously—results in a blurred image or too much distance for tracking features between video frames, reducing tracking quality. The ARCamera class provides tracking state reason information, which you can use to develop UI that tells a user how to resolve low-quality tracking situations.

Two thoughts that may be help on the second limitation:

Tango is a platform that uses computer vision to give devices the ability to understand their position relative to the world around them. But Tango requires very special hardware to run on. So ARCore comes.

The Tango project will be deprecated on March 1st, 2018. Google is continuing AR development with ARCore, a new platform designed for building augmented reality apps for a broad range of devices without the requirement for specialized hardware.

ARCore is a platform for building augmented reality apps on Android. ARCore is designed to work on a wide variety of qualified Android phones running N and later. During the developer preview, ARCore supports the following devices: